Photorejuvenation with LED light, a non-invasive and effective treatment for anti-aging, acne or rosacea

LED light therapy treatments are rapidly becoming recognized by skin care specialists as one of the safest, fastest, and most affordable ways to achieve younger, more radiant looking skin. LED light therapy is the use of specific wavelengths of light to create an anti-aging effect on the skin. Other wavelength combinations are used to control bacteria, which can cause acne breakouts, and still others are used to help minimize rosacea.

The therapeutic benefits of using LED light were discovered by skin cancer researchers. These researchers noted a marked improvement in the look of the skin that was treated with the light and the anti-aging application for LED lights was born. Unlike injectable fillers, plastic surgery and dermal peels, LED light therapy is a non-invasive treatment and safe for all skin types. In use by dermatologists and plastic surgeons, LED lights are prescribed to speed healing from surgery and other more invasive procedures. 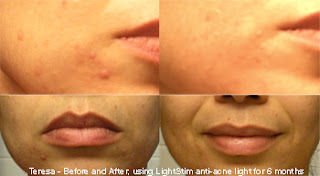 Many hand held devices are currently on the market with various levels of effectiveness. For maximum benefit, look for a device that does just one job (anti-aging, acne, rosacea). Skip the units that combine several treatments in one hand-held unit. Choose a device that works on electricity instead of batteries. You should expect to pay upwards of $300 for a good quality unit. Above is a before (December 2009) and after (May 2010) photo of one of my clients, who is using a LightStim anti-acne light.

The action of the light can be compared to photosynthesis in plants, whereas light stimulates growth. Anti-aging lights work by stimulating the cells that produce collagen to produce more of it. Collagen is an important component of the body and a major player in creating the lusciously plump, firm and toned skin of youth. It is estimated that after the age of 30 we loose roughly 1% of collagen per year.

According to representatives at LightStim, their anti-aging light is capable of increasing collagen production up to 10X in some extremely lucky people, and in most people between 2 and 4 X. Yes, that's times, not percent! Likewise, if a cell is designated to produce elastin, with LED photorejuvenation therapy, the cell will produce more elastin, which is a major player in the "bounce back" quality of young skin.

To learn more about how the lights work, see articles by Dr. Stanley Stanbridge, co-developer of the LightStim photo rejuvenation device and by Joniann Marchese, of LightStim.
Posted by sandy gola at 2:47 PM

sandy gola
Sandy Gola, creator of a natural line of skin care products – Aestheria Handmade Body Care, is also a licensed esthetician and a registered yoga teacher in New Jersey. She enjoys sharing her knowledge of product ingredients and the efficacy of specific treatments, through her ongoing workshops and "skin care tip sheet". She currently works at the Spa at Port Liberté in Jersey City.